My child was fighting at school! 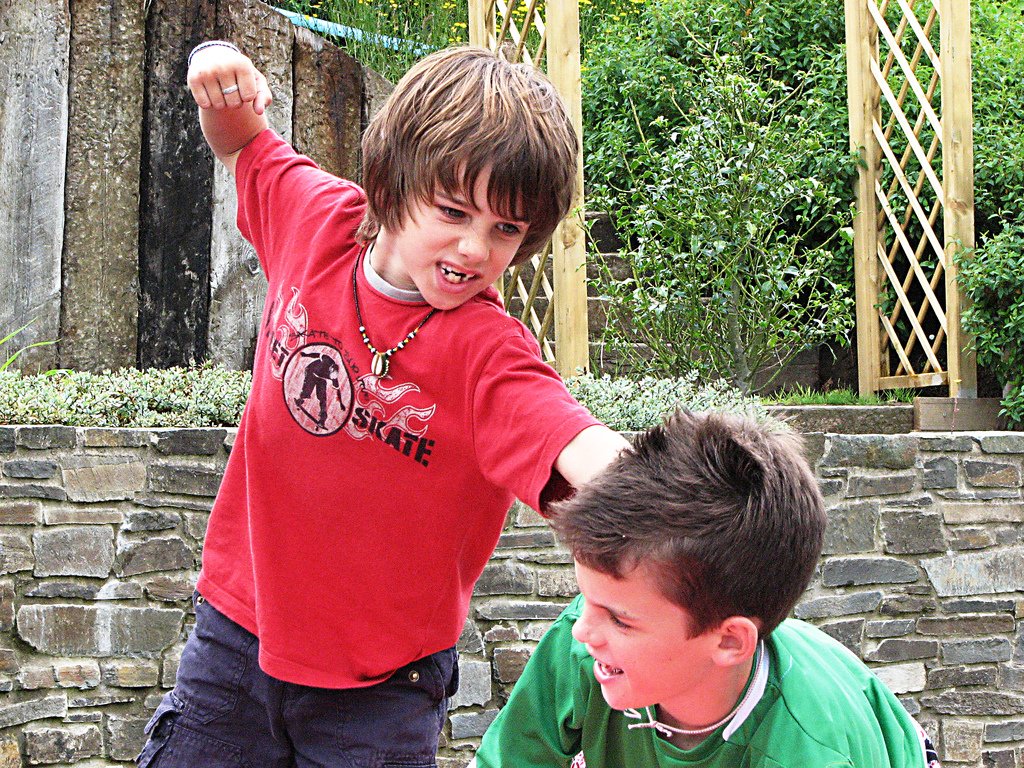 Fighting at school is a tough one for a child.  We all know what the politically correct thing to say is but …Is it that big a deal and should your child be disciplined for it?

Each year, many parents have to grapple through the phone call where the principal or teacher starts to diarize what transpired before their child inevitably decided to give the other child a good a**###kicking. It usually goes like this. .. “Your child is a good kid” but this can’t happen at our school”. Fighting at school is a no-no! Then your child comes home and gives you his interpretation of what transpired before the blowout.  You hear him out, and you reflect on the circumstances objectively, at least you try to.  At the bottom of your gut, you conclude that your child was not in the wrong to defend him/herself but in the same breath, you don’t want the principal or teachers to think you’re promoting violence or aggression. What to do?????

Conflict in general doesn’t have to be a bad thing. For the sake of maintaining control and avoiding lawlessness in our communities, the general consensus in most schools is that fighting won’t be tolerated.  If you receive the phone call that your child has been fighting at school,  there are steps you can take to ensure you‘re being the responsible parent.

GET THE FULL STORY

It’s really important to find out the facts about what happened before jumping to any conclusions.

It’s important to find out the facts so the right message can be passed to your child. What you tell your child at this age goes a long way toward establishing belief systems about conflict in general. Get the full story before uttering a word!

THE CULTURE OF NO SNITCHING

Ultimately, we want our children to feel confident and defend the right causes but in the same breath, allow the powers that be E.g. Teachers, etc to intervene when conflict arises. This can become complicated in a generation where children don’t believe in snitching and will tolerate being bullied and abused by someone until they ultimately lose it and do something out of the ordinary. The culture of “No snitching” plays into whether you’re accepted in peer groups, whether you can be trusted, and so forth. Sometimes, real problems occur on the playground and the only person who knows- is the victim and the perpetrator.  Parents need to evaluate their own stance on snitching and have a conversation with their children.

You have to raise the child you have because children are all different.  You also have to take responsibility for the messages you pass on to your children.  Take into account your child’s temperament, personality, strengths, and weaknesses, and have a conversation about how to problem-solve considering these factors.  For instance, telling your already passive, introverted child to just walk away only strengthens his or her passivity and deprives him/her of learning assertiveness by either speaking up, warning the other child, or defending himself.  Some ideas you might suggest to your child include

BE FAIR TO BOTH KIDS- HAVE A VILLAGE MINDSET

The saying “It takes a village to raise a child” has many implications. One is, that every child is your child. We should be just as concerned for the other child as we are for our own. Ultimately, they‘re all kids and they don’t know any better.   When children get into conflict, they are teachable moments for everyone and it can be used to hone virtues and character. However if we make it personal, defend our own, and or become offended in the process because a principal or teacher has misstepped, we could lose the opportunity to teach our children some very important lessons.

We do this not because our child is wrong or right but because we are modeling for them what happens in real life when we use our hands on someone –whether an adult or child.  Our goal is to prepare our children for the real world and provide consequences for being aggressive- this is the right word. You hit someone- you go to jail and they need to know this. As a parent, it’s your responsibility to mimic the realities of this life.

If you believe your child can benefit from anger management classes, call Positive Kids at 866-503-7454